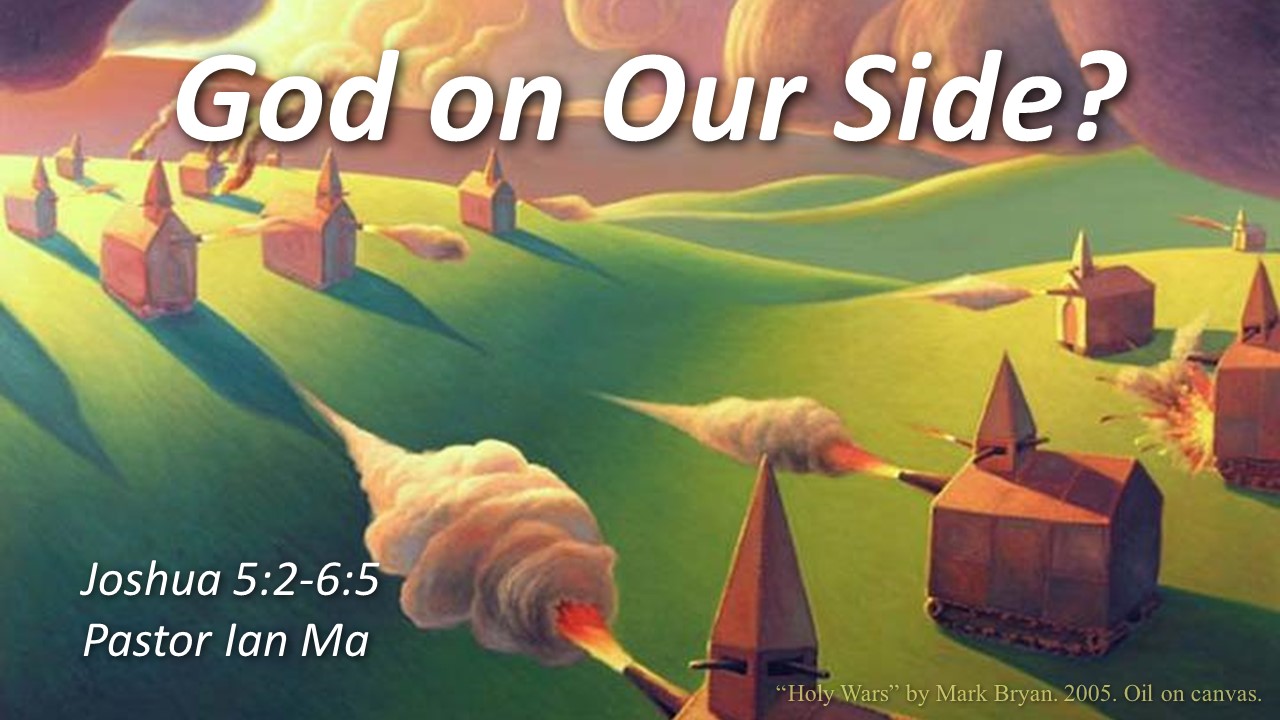 God on Our Side

Circumcision and Passover at Gilgal

4 Now this is why he did so: All those who came out of Egypt—all the men of military age—died in the wilderness on the way after leaving Egypt. 5 All the people that came out had been circumcised, but all the people born in the wilderness during the journey from Egypt had not. 6 The Israelites had moved about in the wilderness forty years until all the men who were of military age when they left Egypt had died, since they had not obeyed the Lord. For the Lord had sworn to them that they would not see the land he had solemnly promised their ancestors to give us, a land flowing with milk and honey. 7 So he raised up their sons in their place, and these were the ones Joshua circumcised. They were still uncircumcised because they had not been circumcised on the way. 8 And after the whole nation had been circumcised, they remained where they were in camp until they were healed.

9 Then the Lord said to Joshua, “Today I have rolled away the reproach of Egypt from you.” So the place has been called Gilgal to this day.

10 On the evening of the fourteenth day of the month, while camped at Gilgal on the plains of Jericho, the Israelites celebrated the Passover. 11 The day after the Passover, that very day, they ate some of the produce of the land: unleavened bread and roasted grain. 12 The manna stopped the day after[c] they ate this food from the land; there was no longer any manna for the Israelites, but that year they ate the produce of Canaan.

The Fall of Jericho

13 Now when Joshua was near Jericho, he looked up and saw a man standing in front of him with a drawn sword in his hand. Joshua went up to him and asked, “Are you for us or for our enemies?”

14 “Neither,” he replied, “but as commander of the army of the Lord I have now come.” Then Joshua fell facedown to the ground in reverence, and asked him, “What message does my Lord have for his servant?”

15 The commander of the Lord’s army replied, “Take off your sandals, for the place where you are standing is holy.” And Joshua did so.

6 Now the gates of Jericho were securely barred because of the Israelites. No one went out and no one came in.

2 Then the Lord said to Joshua, “See, I have delivered Jericho into your hands, along with its king and its fighting men. 3 March around the city once with all the armed men. Do this for six days. 4 Have seven priests carry trumpets of rams’ horns in front of the ark. On the seventh day, march around the city seven times, with the priests blowing the trumpets. 5 When you hear them sound a long blast on the trumpets, have the whole army give a loud shout; then the wall of the city will collapse and the army will go up, everyone straight in.”

6 So Joshua son of Nun called the priests and said to them, “Take up the ark of the covenant of the Lord and have seven priests carry trumpets in front of it.” 7 And he ordered the army, “Advance! March around the city, with an armed guard going ahead of the ark of the Lord.”

8 When Joshua had spoken to the people, the seven priests carrying the seven trumpets before the Lord went forward, blowing their trumpets, and the ark of the Lord’s covenant followed them. 9 The armed guard marched ahead of the priests who blew the trumpets, and the rear guard followed the ark. All this time the trumpets were sounding. 10 But Joshua had commanded the army, “Do not give a war cry, do not raise your voices, do not say a word until the day I tell you to shout. Then shout!” 11 So he had the ark of the Lord carried around the city, circling it once. Then the army returned to camp and spent the night there.

15 On the seventh day, they got up at daybreak and marched around the city seven times in the same manner, except that on that day they circled the city seven times. 16 The seventh time around, when the priests sounded the trumpet blast, Joshua commanded the army, “Shout! For the Lord has given you the city! 17 The city and all that is in it are to be devoted to the Lord. Only Rahab the prostitute and all who are with her in her house shall be spared, because she hid the spies we sent. 18 But keep away from the devoted things, so that you will not bring about your own destruction by taking any of them. Otherwise you will make the camp of Israel liable to destruction and bring trouble on it. 19 All the silver and gold and the articles of bronze and iron are sacred to the Lord and must go into his treasury.”

20 When the trumpets sounded, the army shouted, and at the sound of the trumpet, when the men gave a loud shout, the wall collapsed; so everyone charged straight in, and they took the city. 21 They devoted the city to the Lord and destroyed with the sword every living thing in it—men and women, young and old, cattle, sheep and donkeys.

22 Joshua said to the two men who had spied out the land, “Go into the prostitute’s house and bring her out and all who belong to her, in accordance with your oath to her.” 23 So the young men who had done the spying went in and brought out Rahab, her father and mother, her brothers and sisters and all who belonged to her. They brought out her entire family and put them in a place outside the camp of Israel.

24 Then they burned the whole city and everything in it, but they put the silver and gold and the articles of bronze and iron into the treasury of the Lord’s house. 25 But Joshua spared Rahab the prostitute, with her family and all who belonged to her, because she hid the men Joshua had sent as spies to Jericho—and she lives among the Israelites to this day.

26 At that time Joshua pronounced this solemn oath: “Cursed before the Lord is the one who undertakes to rebuild this city, Jericho:

27 So the Lord was with Joshua, and his fame spread throughout the land.